Chief among them is this bullshit: 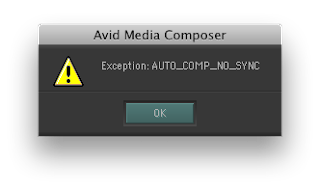 This is what happens when I try to multigroup by doing exactly the same fucking thing that I used to do in Avid 4.0.5.16.  Fucking Avid 5.5 is bullshit.

Let's start at the beginning (because it's a very good place to start) (and also because I like making Dad Jokes, apparently):  The group I'm making has a lot of pretty basic flaws.  First, it's eight hours long - that's actual media length, not the time spanned by that media.  Second, there's both XD Cam footage and imported GoPro clips.  Third, there's also iso audio.  Fourth, that iso audio is actually three different sources of iso audio.  Fuckin' right!  Normally I'd break this shit up into more manageable chunks, but I'm stepping into a show mid-season (as in, it's actively fucking airing) so there's not really time to explain different things to the team.  We'll stick with making a thing that looks just like the old thing, but works.

Okay, to the Google!

Wow, the whole fucking internet is full of people saying "you can't multigroup in 24P, " and also "waaaaa I'm a baby!"  Fuck you internet.  You're not helping.  Okay, maybe some sort of similar issue will come up if I Goog the error message (you know, like how you got to this page).  Okay, this is more useful.

"Can't multigroup GoPro footage" and "I have a fix for multigrouping GoPro footage."  A fix??  Fuck yes!  Good job, guy on the interwebs, what's your fix?

The fuck you say?  Seriously.  Not using the audio isn't a fucking fix.  That's giving up and going home.  Literally.  You shouldn't have a job.

Does anyone else have something useful here?  No?  Seriously?  Assholes.

Okay, let's search again for just something more generic.  Maybe just "Can't multigroup"  That seems... too generic.  "Can't multigroup 24P" perhaps... Oh.  My.  God.  Okay, this is fucking paydirt.  Many, many props to the author of this excellent blog (and not nearly as full of offensive language, much to my chagrin):  http://rittorno.wordpress.com/  Seriously, everyone should just bookmark this page.  Oh yeah, the specific post I found to help me out?  Here it is.  He literally named it "Avid multigrouping doesn't work 24P Project.  Amazeballs.

Now, it's not exactly specific about the sort of error you get or how this helps, but don't worry, I'm gonna handle that shit right the fuck now.

Open your group bin with the sequence in question.

Then open the original source bins of every single imported clip that is in that sequence.

For each imported clip, you have to modify the source so that there is one, and if one already exists, you have to modify it anyway - just set the new source to be the exact same as the old one.  Running a little test with my GoPro footage... BAM!  I just grouped some motherfucking GoPro footage with audio in fucking Avid 5.5 in a 24P project.  Suck my dick, internet!

Alright, let's do the full group now, including the iso audio.

No timecode found for clip "clipname"

Clicking "more" gets me:

Now where have I seen that error before?

So I know this has to do with setting a source also.  Okay, so what in the seven green shits of Satan is wrong with my sources?  My iso audio is an autosync subclip of a subsequence that's made from three different sources... A ha!  All with different source labels.  Okay, if I modify those sources to all be the same source...

And that's how you multigroup every clip, all your audio, and all your video in a 24P Avid 5.5+ project.

Fuck you Avid, you can't stop me.