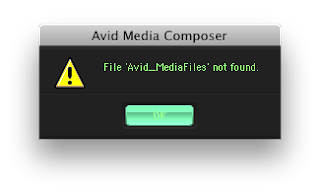 This is a great error.  It's great for a couple of reasons.  Firstly, the problem isn't that "Avid_MediaFiles' can't be found.  That's the folder on your media drive named "Avid Media Files" and it's pretty goddamn easily found by both you and Avid.  No, the real problem is that a file *inside* Avid Media Files can't be found.  Which file?  Good question.  A database file.  What this error message should really say is:

Or the error message could be actually helpful and say:

You know, something actually fucking helpful.  But no.  No, this message basically just says that Avid lost something, it isn't sure what, and it sure as shit isn't going to let you save any bins until you fix the problem.  Also, opening the Media Tool will cause this message to appear in an endless loop.  So don't do that.

But wait a minute - doesn't Avid just rebuild databases when it can't find them?  Well, sort of.  It will rebuild databases in the media files subfolder that is named the exact same name as the computer you're working on (and those folder names are taken from the system that ingested the media).  So you can cheat by renaming all of those folders to:

and so forth.  Then, if you click back to Avid, it will rebuild all of the databases in those folders (depending on your version of Avid, you may have to manually select 'Refresh Media Directories' from the File menu).  Note that rebuilding databases takes a fucking long time.  Go get a coffee or something.

So if Avid can rebuild databases on its own, what the fuck is going on with this error message?  Good question.  It turns out that this particular error was caused by (and I really, really hate to say this) the User.  It's what is known in the IT world as an ID-10-T error (read that again, without the hyphens).  Some asshole has renamed your computer while you were in the middle of creating new media.

In the particular case of the message above, I set my system to import overnight and then I went home like a normal human.  One of the night time Assistant Editors then came in, during my fucking import, and renamed the computer while it was running Avid.  What the fuck?!  So even though this error message is horrible, it's actually not Avid's fault.  The end user did something really stupid, and Avid at least had the presence of mind not to just crash.

To fix the problem, first take note of all unsaved bins and what media clips are in them.  Then force quit avid, delete the lock file(s) on the bin(s) that you had open at the time, and then rename either your computer to match the media folder name or the media folder to match your computer's name.  It depends, I suppose, on whether the renaming of the computer was intentional or simply moronic.  Relaunch Avid, wait for the databases to rebuild, and then use the media tool to recover the clips that were never saved to your bins because you had to force quit.

At least there's some good news:  Stupid people have given me a reason to post another stirring installment of Avid Hates You!